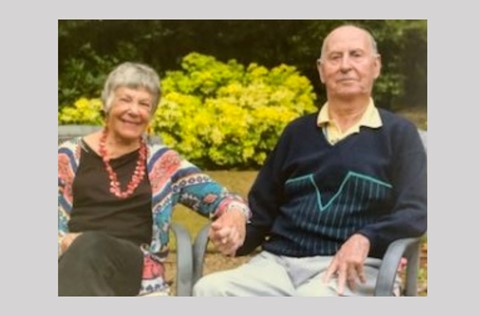 An ex-navy man and active sportsman, Arnold Reed has led a vibrant and physically active life with his wife Audrey. Both independent spirits, the couple’s life revolved around the squash club that Arnold went on to own and run after retirement from the Navy, sports, travel and socialising.

Up until Arnold had his hip replaced at the age of 87, Arnold’s love of sport had kept him active. However, finding himself to be less mobile, Audrey noted a decline in Arnold's zest for life and in the three years post his hip replacement, his old life seemed to be disintegrating:

“Arnold had always been an active man, but after having his hip replaced, he gradually became more comfortable staying at home. He did not seem to be interested in what he had used to love doing before and as the days passed, he become frailer and it became increasingly difficult to rouse him out of bed. As hard as it was for Arnold, it was also a very difficult life change for me, as I slipped into the role of his Carer.”

Enjoying full and independent lives from each other, Audrey had never had to worry about Arnold’s mental or physical health before, so the change in his outlook on life together with an increasing absent-mindedness was hard to adjust to. It was at this point that Audrey and her family turned to Oysta for assistance.

“Arnold was still visiting the library in the town on a regular basis, but as much as we wanted to encourage this independent activity, we worried about him getting lost or panicking if he became confused. I just couldn’t be with him all of the time and the family felt it was important for us to continue to have time alone to pursue our own interests.

“The Oysta Pearl was such a help during this period. It gave us the reassurance that Arnold could get help if he needed it. As my daughters and I were all on the network contact list with Oysta, it also enabled us, as a dispersed family unit, the ability to come together to over-see Arnold’s well-being. This helped to ease the burden on my shoulders, knowing that there was a team of us working together.”

Using digital technology to monitor Arnold’s well-being wherever he was located, as well as sending him reminders as to when to take his medication, the Oysta Pearl had a significant and positive impact on the Reed family’s lives, at that period.

Using the Oysta Pearl, Arnold and Audrey were able to enjoy several more years of semi-independence from each other. Giving Audrey the break that she needed to be able to continue to enjoy her own pursuits and foreign travels, she knew that when Arnold was on his own, he was always under the Oysta cloak of care. For Arnold, it meant increased confidence and safety, enabling him to continue to enjoy visits to the town unaided by his wife and time alone in his home.

“There came a point where Arthur’s needs exceeded the capability of the Oysta Pearl and it was then that we made the decision to move to supported accommodation and onto the next stage of Arthur’s care.

“The Oysta Pearl was a wonderful tool at that point in our lives. Giving us both a pro-longed, if different ‘normal’ for several more years, may well have helped to slow down the speed of Arthur’s deterioration of health. It allowed us both to carry on with a degree of independence from each other and to continue as far as we could to live our lives as we always had done.” concludes Audrey.